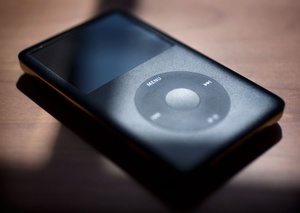 According to Forrester analyst Charles Golvin, this is the year that will mark the end of the iPod Classic, Apple's high-capacity storage music players.
The device does not have a touchscreen, nor does it have the new Lightning dock connector and the MP3 player has not been updated in two years.

Anthony Scarsella, chief gadget officer of Gazelle.com, which buys and sells used Apple products (among other electronics), agreed with Golvin (via Wired). "It's been a couple of years since the iPod classic has been updated. We can assume it will be phased out, unless we see it updated on September 10th."

With a heavy lineup of new products expected tomorrow during their press event, Apple is not expected to unveil an updated Classic, which offers 160GB of internal HDD storage. By comparison, even high-end iPhones and iPod Touch devices only have 64GB flash storage.

iPod sales peaked in 2008, after 7 years as the undisputed king of the MP3 player market. The sales numbers have gotten so bad that Apple did not even report the figures during their latest earnings report.

I have no interest in the 'Touch'. i will own my classic for many years to come. The touch has a high price with little storage.

I better buy an extra classic to keep in storage then. It's by far the best thing to keep in my car.

That's a shame...my 120GB Zune (which I LOVE) is getting a bit long in the tooth. The Classic was going to be my replacement. Smart phones are getting too damn big to strap to an arm during workouts & outdoor activities.

They're tanks! In a durable, good way. My 30gig (which I got for $1 off of an online referral promotion - yes they do work)has been bouncing around in my knapsack to and from work for about 5 years now.
It's plugged into my work PC right now. I use it as data storage and stream videos to my PC screen from it.