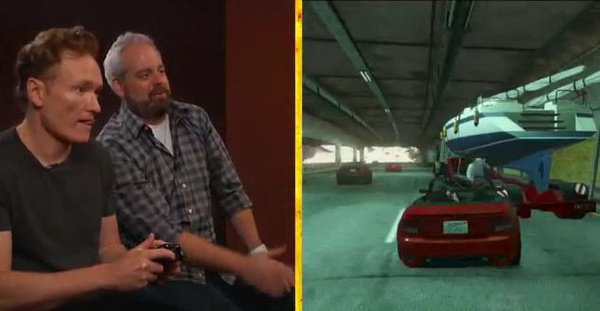 Conan O'Brien has posted an awesome review of Grand Theft Auto V, which develops into a vendetta against a virtual Strip Club.
In his "clueless gamer" review, Conan shows that he would be utterly useless as a getaway driver in the game - he didn't even make it out of Michael's driveway - and that he likes a good fist fight with strangers.

The best parts of the review are Conan's reaction to finally getting Franklin onto a yacht on the back of a truck tearing down a freeway, and later on his encounter with bouncers at a Strip Club.

After being first thrown out of the club for getting too "handsy" with the ladies, Conan's character (Mike) ends up in a rundown hospital, but very much alive, after being shot to death at the club. Conan credits this incredible medical treatment to Obamacare.

He then returns to the club where he gets a private dance from two virtual ladies, but then once again his hands land him in trouble and he gets booted out.

Later on - unable to get over the encounter at the strip club earlier - Conan jacks a helicopter that fires missiles and returns to get revenge.. twice.

Here's the video (CONTENT WARNING: Rated R in US, Adult in most territories)