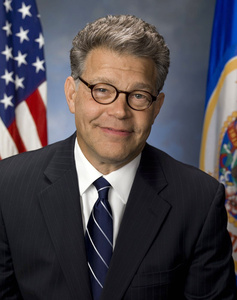 The Cupertino-based giant assured users that fingerprint data is safely stored in the A7 SoC that powers the iPhone 5s, and that it is stored as mathematical data. Franken asks Cook in his letter if it is at all possible that the fingerprint data could be converted into a digital or visual format, and whether the raw information could be extracted from an iPhone, which Apple doesn't think likely.

The senator also raised questions about Apple's ability to share fingerprint information with law enforcement or other federal authorities, asking Cook to provide assurances that Apple will never share fingerprint data with government agencies without due process.

However, Apple has already stated repeatedly that fingerprint data is stored in the A7 only, and is never backed up to iCloud or in any way transferred to Apple servers, or even to other devices.

"Passwords are secret and dynamic; fingerprints are public and permanent," wrote Sen. Franken.

"If you don't tell anyone your password, no one will know what it is. If someone hacks your password, you can change it--as many times as you want. You can't change your fingerprints. You have only ten of them. And you leave them on everything you touch; they are definitely not a secret. What's more, a password doesn't uniquely identify its owner--a fingerprint does. Let me put it this way: if hackers get a hold of your thumbprint, they could use it to identify and impersonate you for the rest of your life."

Still, it is a good thing that a senator will ask these questions, given that we do live in an era where privacy, data security and government surveillance are big concerns.

Apple's Touch ID technology is also the subject of a crowd-funded hacking competition, where the winner will receive thousands of dollars, BitCoins and even alcoholic beverages for demonstrating an effective attack against it.

It's a valid concern with any kind of biometric data. You can't change your fingerprints, retina pattern, or dna so if that was ever compromised there would be very little you could do.

I rarely agree with anything that Al Franken has to say, but on this subject, he is spot on.

Wouldn't it be scary if a corrupt government could imprison it's detractors with evidence from a digital database of DNA and fingerprints that they say is irrefutable?
America, land of the free, corporate run prisons, and more people imprisoned per capita than any other nation.