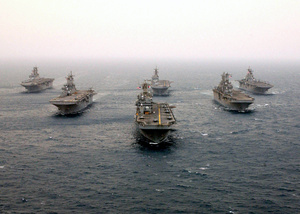 U.S. officials have said this week that Iran hacked or attempted to hack into unclassified Navy computers repeatedly over the past few weeks.
The officials say the attacks were brought by hackers working for the government or by groups approved by Iranian officials.

Government officials says the most recent incident was for the week starting September 15th, before a security update was put in place.

To date, Iranian-backed hacking groups have targeted U.S. banks and computer networks running energy companies. Attacking the military directly would be an escalation in the cyberwar. In the most recent case, the attackers "penetrated an unclassified computer network that is used for email and the service's internal intranet," officials added.

Fortunately, the officials said they believed that no information of significant value was stolen.

"We take these attempts seriously and work to learn lessons from every one of them," a department spokesman said.
Tweet
Tags: Iran U.S. Navy
<Delta to distribute Surface 2, Lumia 820 to pilots, flight attendants >Toshiba unveils Qosmio X75 gaming laptop
Previous Next

Big deal (sarcasm). I'm from the U.S. and we should have no qualms about others doing to us what we do to them.

If we don't want others hacking into our defense systems then ffs, we shouldn't hack into theirs. But that's the nature of defense and espionage, so it's bound to continue on both fronts, regardless of whether we're friends or enemies.

Quote:The officials say the attacks were brought by hackers working for the government or by groups approved by Iranian officials.

How did this not result in a declaration of war?

^ Seriously? With that logic, we (USA) would be at war with China right now, and that's something I definitely don't want.

Countries spy on each other. It's how the world works (unfortunately).

One (1) tactical nuke dropped in the center of the Middle East would bring an insurmountable amount of peace to this planet for a loooooooong time.

As for the comment "The officials say the attacks were brought by hackers working for the government or by groups approved by Iranian officials."

The U.S. gov't is the most corrupt and untrustworthy gov't in the WORLD..........At least in Mexico, everyone has the equal oppty. to buy their way out of just about any situation. Here in the U.S.......one needs to be rolling in the dough to do that.

Once again The U.S. War Machine BS at "their" Media PR.