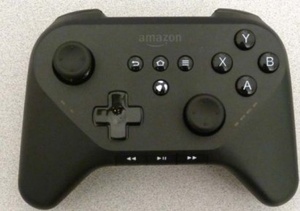 According to a new filing with an overseas regulatory agency (like the U.S.' FCC), it appears that Amazon's oft-rumored set-top box will include a Bluetooth gaming controller.
The media streaming device was set for a fall launch last year, but was met with delays. The new device could launch as soon as next month, if rumors prove to be accurate.

Netflix and Hulu Plus have already been confirmed for the device, as has a Kindle-ized version of Android. There has always been an expectation that gaming would be supported right out of the gate, given the hundreds of thousands of games available for Android.

That is one ugly controller.

That just looks painful. What, are they trying to one under the ouya?