SanDisk announces 4TB SSD with 8TB in the pipeline 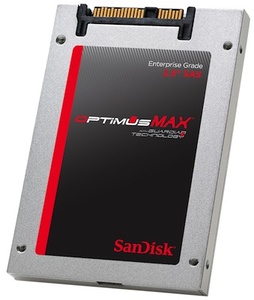 SanDisk has announced this week the launch of the world's first enterprise-class 4TB SSD using 19nm process technology.
Additionally, the company showed off new Lightning II performance SSDs with capacities up to 1.6TB.

Looking into the future, SanDisk confirmed Optimus MAX branded 6TB and 8TB SSDs at the 2.5-inch form factor for 2015, promising they will be first to market.

The 4TB SSD can reach 400 MBps sequential reads and writes and up to 75,000 random I/Os per second (IOPS) for reads and writes, notes the company. The drive is aimed at those with data warehousing, media streaming and web server needs.

Pricing was not revealed since pricing for enterprise-class drives are determined by the third-party sellers.

This only makes sense since disk surface density is a huge limiter of hard drives compared to the much smaller, no mechanical moving parts of memory module SSD's. As SSD's get their wear leveling down more and more are mass produced, price will lower and we will see HDD's slowly go away, evolution.

Nope, we're going to reach a fab and manufacturing limit here too. For now, storage limits are coming closer to parity, but it won't last.

We're finally starting to see some 3D and overlapping writing on magnetic media (HDDs). These techniques will allow vastly superior storage for a while, as the flash memory they're working from is far closer to binary, and simply can't scale in that manner due to the requirements of non leaking gates maintaining data integrity.

Moral of the Story? SSDs still faster, and to remain that way. Capacity growth hasn't caught up to Moore's Law yet, but is getting closer. HDDs still cheaper, with larger capacities, more re-writes, better catastrophic recovery potentials, and truly significant growth on the horizon.

The Question? Will non-competes for higher profit margins and easier consistent scaling continue to win out?

I'm all for HDD's but there will be a day when we see them disapear whether it is SSD's or good old bubble memory something will replace it for sure. That's Steve's law.

Laws changes as time goes bye.
What's True today, not necessary will be the True tomorrow.

No doubt, we can't predict the future most of the time...