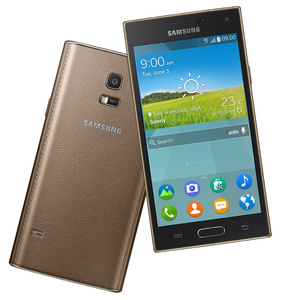 Samsung has launched the Samsung Z Tizen smartphone ahead of the Tizen Developer Conference to be held in San Francisco from Wednesday, June 3.
The Z packs a 4.8-inch HD Super AMOLED display (1280 x 720), a fingerprint censor and will be available in Black and Gold. Under the hood, it houses a 2.3GHz Quad Core application processor, 2GB of RAM and 16GB internal memory which is expandable to 64GB via microSD.

Of course the most notable thing about the device is on the software side. The Samsung Z will be the first commercially available smartphone running the Tizen (v 2.2.1) operating system, which Samsung promises delivers a fast, optimal performance with improved memory management compared to Android.

The OS has made an appearance in Samsung's Galaxy Gear devices, but has struggled to make an appearance in smartphones after NTT Docomo in Japan cancelled plans to launch a Tizen device earlier this year, while France's Orange carrier also hit the brakes on a Tizen launch.

Samsung was expected to focus only on emerging markets at first with Tizen smartphones before launching a handset in the United States or Europe, and it has stuck to that strategy with the Samsung Z, which will launch in Russia in Q3 before entering other territories. India is probably the next likely landing zone for the Tizen handset.
Tweet
Tags: Samsung Samsung Tizen Samsung Z
<FCC to consider changing definition of broadband, raising download and upload speed requirements >Huawei achieves 10Gbps Wi-Fi speed
Previous Next
Comments have been disabled for this article.