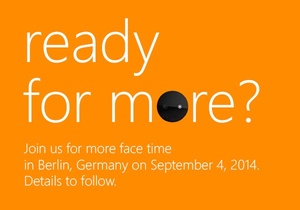 Microsoft has sent out press invites for an event in which the company will launch a new Lumia Windows Phone.
Expected to be launched is the Lumia 730, described by Microsoft devices head Stephen Elop as the company's new "selfie phone" during an internal meeting.

In the invite, there is a picture of the camera in the lettering and the invite asks press members to "Join us for more face time," once again suggesting the front-facing camera will be key.

So far, if leaked Lumia 730 pictures are to be believed, the phone will have a 5-megapixel front camera, notably larger than most current high-end phones including the Galaxy S5, iPhone 5S and HTC One.

The event is scheduled for September 4th.

5 megapixels front camera is great but what about the Nokia LUmia 930 is one USA is looking for? Hey Menion that might be conceited but I get your point.
btw I am a djay at at a male strip club and when I play #selfie by The Chainsmokers it starts a frenzie