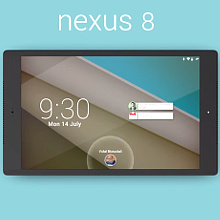 According to the WSJ, Google has selected HTC as its partner for the upcoming Nexus 9, the company's new Android reference tablet set for release in the coming months.
HTC has not touched tablets since its failed Flyer hybrid tablet in 2011, but executives did say in 2012 that if a tablet could make an impact in the market, they would reconsider getting back in the market. It appears that that time is now.

Google and HTC have a long history, and HTC even built the original Android device; the T-Mobile G1. Google has worked with HTC, Samsung and LG for its line of Nexus smartphones and tablets. By having a broad base of manufacturers for its products, Google avoids creating a monopoly or favoritism for one OEM.

HTC has created excellent smartphones over the years, and many have their 2014 One (M8) as the top phone of the year. However, sales have remained stagnant and the company has lost major share to Samsung, LG and even Motorola over the past few years.

There have been quite a few rumors about the Nexus 9 in recent months, to the point where we believe we have a full spec sheet on the device.

I hope those specs are real...