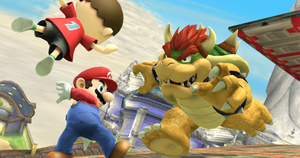 Thanks to some major first-party games, it looks like the Nintendo Wii U is back in business.
Nintendo says that for the first 10 months of the year, Wii U hardware sales have increased 47 percent year-over-year. In addition, software sales have jumped 84 percent, thanks mainly to Mario Kart and a few other hit titles.

Adds Nintendo: "Those numbers are both poised to grow with the one-two punch of Super Smash Bros. for Wii U and amiibo on Nov. 21, which are then quickly joined by Captain Toad: Treasure Tracker on Dec. 5."

One would also expect a price cut in the coming month to get more hardware out there (especially in conjunction with Super Smash), but Nintendo has not confirmed such a move, as of yet.

Source:
Nintendo
Tweet
Tags: consoles Nintendo Wii U
<Latest 'Call of Duty' reaches 7.5 million units sold in first week >Nvidia SHIELD, SHIELD tablet get Android 5.0 and can now stream games from the cloud
Previous Next
Comments have been disabled for this article.