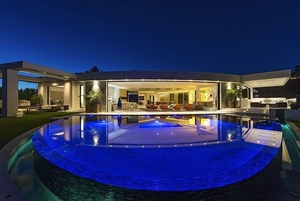 It appears that being the most powerful couple in entertainment is not enough to compete with Minecraft money.
Markus 'Notch' Persson, the creator of the blockbuster game, became a billionaire in September when Microsoft acquired Mojang AB for $2.5 billion. Notch is said to have owned 70 percent of the gaming studio, netting the developer $1.75 billion before taxes.

The dev is now the proud owner of a $70 million mansion in Beverly Hills, California, outbidding Beyoncé and Jay Z, who were expected to win.

Curbed has an apt description of the ridiculous house: "It's outfitted with a candy room, a car showroom, vodka and tequila bars, a 54-foot curved glass door that opens onto the pool, eight bedrooms, 15 bathrooms, apartment-sized closets, and a movie theater, and even the listing called it 'an overwhelming sensory experience.'"

You can see more pictures at the source.
Tweet
Tags: minecraft markus notch persson
<President Obama believes Sony made a mistake in pulling 'The Interview' >Report: Sony to release 'The Interview' for free on their Crackle service
Previous Next

Meh. I'm no communist or bleeding heart but for some reason being as rich as the people are just doesn't seem right when so many are struggling to feed their families and have a house over their heads.