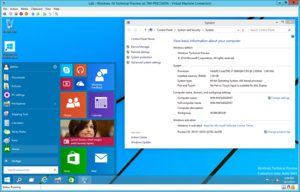 According to Microsoft's Gabriel Aul, the first upcoming Windows 10 Technical Preview will support Windows Phone devices that only have 512MB of RAM.
Aul is Microsoft's Engineering General Manager and had been responding to support questions on Twitter.

Keep in mind that Aul only confirmed the first Technical Preview would support the older less powerful devices, so it is unclear whether subsequent releases will have the same support.

Microsoft has not fully confirmed its supported Windows Phones for Windows 10 Technical Preview, but we should know more in the coming weeks.

@Qushery @NicholasHayman Hmmm. Do I cave? Don't think you can squeeze anything ELSE out of me:-) Yes, we'll have 512MB devices for 1st prvw.

Honestly if you decide to do windows phone 10 and decide to integrate it into the o.s i might just go and purchase a windows box again just for it but if not no thanks i will stick with macintosh

If this opens the phone to any store to get my apps I will most likely switch from my Android phone.