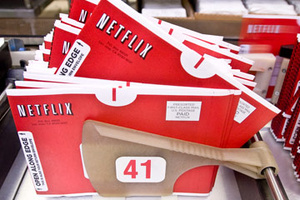 Though we would forgive you if you forgot, Netflix used to be a DVD-by-mail rental company before becoming a streaming giant.
In 2005, Netflix acquired Walmart's failed DVD-by-mail service, which had 60,000 subscribers in exchange for promoting Walmart's online DVD sales and for a cut of revenue made off of previous Walmart subscribers.

After the deal, class action lawsuits were filed, alleging that the deal kept prices artificially high. At the time, Blockbuster was offering a 3U plan (3 discs out at a time, unlimited per month) for $15.99 while Netflix was charging $19.95 for the same deal. The suits alleged that Netflix would have dropped their prices to match had it not been for the Walmart deal.

Walmart decided to settle the suit for $27 million in 2011, meaning all 1.2 million claimants will receive a gift card for $12. Netflix, on the other hand, took the battle to court and has now beaten the charges since the subscribers could not adequately prove they were injured by the deal.

Netflix never lowered its 3U price at any time in response to Walmart. Even though Walmart entered the market with a lower price ($18.76 to Netflix's $19.95) for a comparable 3U plan, Netflix did not alter its 3U plan price for a full year after Walmart entered the market. When Netflix eventually did change the price, a year later, it increased the price to $21.99 per month. Netflix also did not reduce its price when Blockbuster offered a 3U plan for $14.99 (while Netflix's was $17.99), even though Blockbuster had a much greater share of the market than Walmart, and even though Netflix rightfully viewed Blockbuster as a competitive threat. Thus, the district court properly determined that no reasonable juror could conclude that Netflix was going to lower its 3U price."

Netflix was also awarded $700,000 in attorney and court fees.

Sanity prevails for one case.. a lot of class action lawsuits are by money grubbing lawyers for lawyers fees.

what is this blockbuster this article mentions, some sort of bomb?

Hell must have frozen over. The US court system didn't do the exact backwards thing for once? Especially in a technology case!?!