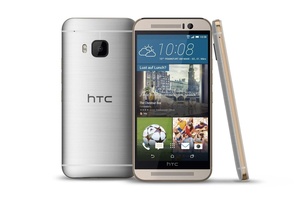 HTC's this years flagship reveal was as expected the One M9. A new versio of last year's One was just that – a new version.
Starting with the five inch Full HD display everything seems to be pretty much as it is with the company's offering. They have made a change in the camera department and switched the UltraPixel camera in the back for a 20 megapixel one that will improve the detail but that seems to be it.

The aluminum shelled One M9 features a Snapdragon 810, outperformed by the Samsung's own Exynos chip, 3 gigabytes of RAM, 32 gigabytes of microSD expandable storage and a UltraPixel selfie camera that claims to provide low light performance to the facial shots that you desire.

The phone has a 2840 mAh battery and an improved front facing duo BoomSound speakers that support Dolby Surround.

HTC One M9 is expected to land on all major carriers "early spring" with a $199 on two year contract price tag.
Tweet
Tags: Android HTC MWC HTC One M9 MWC 2015
<Sony's new Z4 Tablet is lighter than Air – or Air 2 >The first Galaxy S6 camera samples have been released
Previous Next

Seems like only apple can get away with keeping the same design for two years and just updating the specs of their devices.

I am not about to replace my M8 with the M9 but if I was buying a new phone I would not rule the M9 out. I love my M8 can't see why I would not love the M9.

This dose assume that the M9 will have a Google Play edition.