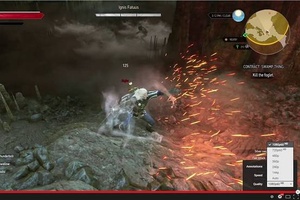 Smooth! In a move aimed at Amazon's Twitch and others in the growing arena of video game streaming, YouTube now supports 60fps in 1080p.
Google's video giant previously added support for 60fps videos, which was welcomed and embraced by gamers. In HD, the difference between 30fps and 60fps is very noticeable for some fast action content. Now YouTube has added the same support for streaming game footage, using a HTML5 player in compatible browsers.

"When you start a live stream on YouTube at 60fps, we'll transcode your stream into 720p60 and 1080p60, which means silky smooth playback for gaming and other fast-action videos," YouTube's creator blog announced.

"We'll also make your stream available in 30fps on devices where high frame rate viewing is not yet available, while we work to expand support in the coming weeks."

Additionally, the HTML5 player supports variable speed playback, enabling viewers to skip backwards and then increase the playback rate to 1.5x or 2x to catch up to live.

Twitch - which cost Amazon almost $1 billion to acquire - claims to have reached an average of 100 million viewers per month. Google was considering buying Twitch before Amazon swooped in, and now wants its YouTube platform to eat its audience instead.
Tweet
Tags: YouTube Twitch 60fps
<Grand Theft Auto developer sues the BBC >Google sending piracy settlement notices to Fiber subscribers?
Previous Next
Comments have been disabled for this article.