Bug in iMessage freezes the device 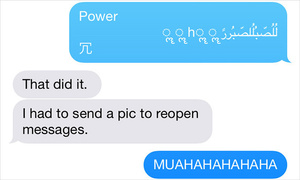 A bug has been found in iOS that allows a certain message to crash your iPhone or iPad. The bug in the messaging app or notifications makes the device freeze when receiving specific Arabic text string in iMessage.
The string shown in the picture crashes the device in such a way that it is unusable until fixed. Luckily there is a simple fix: send another message to the device. You can do this with Siri or from another device.

Since Apple has also acknowledged that the bug exists and suggests using Siri to answer the message. This also unfreezes the device. Apple also recommends to remove the entire conversation.

It seems that the bug is in parsing of the Arabic language or specific text format. Apple has promised a fix to the issue in the next software update. Until then you have to rely on these workarounds.