Best of E3: Remastered Gears of War headed to Xbox One as 'Ultimate Edition' 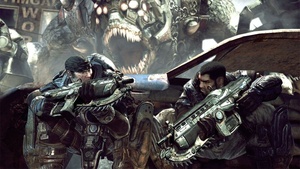 As rumored, a remastered remake of the original Gears of War is headed to the Xbox at the end of the summer.
Xbox One gamers will get Gears of War: Ultimate Edition on August 25th, and a public beta has begun today.

The remastered game will run at 1080p/60gps and include 90 extra minutes that were previously only released on the PC version of the game.

Besides the remaster, developer The Coalition announced Gears of War 4 scheduled for next year.

Tweet
Tags: E3 Microsoft Xbox One Gears of War
<Best of E3: Rare Replay brings 30 classic titles to the Xbox One >Best of E3: New 'Metal Gear Solid V: The Phantom Pain' trailer unveiled
Previous Next Write a comment
Comments have been disabled for this article.