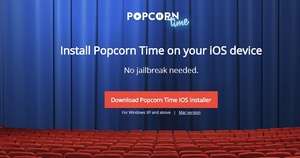 The Popcorn Time team has revealed this week that they have seen over 1 million downloads for non-jailbroken iOS devices.
Popcorn Time, which allows you to stream pirated material and has an interface that makes everything easy to find (think Netflix), launched for iOS two months ago. The developers found a way to load the app to iOS devices through a special installer, thus avoiding Apple's stringent security.

The team was very proud of the milestone, writing: "Popcorn Time, so it seems, is the most downloaded mobile app outside the Google and Apple stores. And we take huge pride in this. This is us, this is what we've created and it's f***ing breaking records. But the silver lining of this whole thing, what's even bigger in our perspective, is the fact that Popcorn Time is the only app in the *world* that can be installed on non-jailbroken iOS devices outside [Apple's] app store."

That in of itself is quite a feat, as Apple makes it very hard to surpass the Apple App Store unless you are willing to take the plunge of jailbreaking your device.

It's also not just Americans downloading the app to their iPhones, as the Popcorn Time also revealed the top downloaders of the app by country. The Netherlands led the way with a full 19.14 percent of downloaders coming from the nation followed by the U.S. at 17.62 percent and Brazil at 7.21 percent.

It was to be expected with this amount of popularity in the uk they tryna put down the popcorn time sites. Still looking to download popcorn time you can download it on http://www.popcorntime-download.co.uk

Shame on you for linking to and perpetuating this nasty assed, trojan-infused, MASSIVE DMCA-violating, crap program NEWB!!!!!!


This is Afterdawn NEWB......if people want this crappy software, they know how to find it.

Your link is NOT an "official" link either. It's third-party.