The disc is dead: Microsoft confirms it will also sell Windows 10 on USB drives 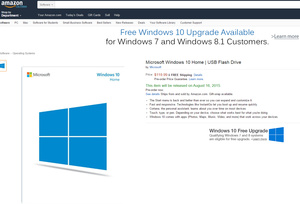 Microsoft has confirmed that it will sell Windows 10 on USB drives, finally offering an alternative to DVDs for those that like to own a "physical" copy of the operating system.
The offering is great for notebook owners, as the DVD drive is no longer a standard found in every computer. Additionally, those with operating system issues will have an alternative way to repair their devices or reformat.

"Windows 10 will be available on USB drives for purchase in retail channels shortly after launch," a Microsoft spokesperson added. "The suggested retail prices for Windows 10 in the U.S. are the same as Windows 8.1."

Microsoft also confirmed that Amazon will not be the only retailer to offer the devices, and Microsoft will offer it themselves through the Microsoft Store.

I am assuming we could make our copy of Win10 to a USB in due course?, much cheaper.

Been sayin' this for years!

Optical media is dying, not dead but should be soon!

But now that MS stated this, people will put a little stock into it.


Listen to me young grasshoppers and you will go far. I am the light.

Originally posted by hearme0: Been sayin' this for years!

Optical media is dying, not dead but should be soon!

But now that MS stated this, people will put a little stock into it.


Listen to me young grasshoppers and you will go far. I am the light.

Optical media is alive and well, companies like Time Warner and Comcast are doing everything they can to ensure that our movies come in physical format for decades to come...and the people who happily brick bluray drives to supposedly prevent piracy are not about to go to USB...especially if it costs more.

Personally I'm more interested in the hardware here...will the USB device protect the Windows installer files from modifications and deletions? Will there be a writable area to store Windows updates, drivers, etc so future installs won't have to download them again? Will there be a folder for raid drivers and such so you don't need the driver CD when installing Windows from USB? Will there be some kind of special ID on the drive, so that the Windows installer doesn't detect it as your boot hard drive and then refuse to install to your actual boot hard drive?

I haven't used a disc in years to install an OS on a computer.

Optical media is NOT dead......Try telling anything different to the folks who are developing the holographic 3D data disc.

Optical media - as a general technology - will not be going away any time soon. Just as can be inferred from ivymike's post, what changes is the current standard(s). For example, Blu-Ray has been woefully obsolete, relative to the state of the art, for 5, if not 10 years or more.

Until/unless single-atom/molecule storage becomes practical, nothing else approaches current advances in optical media for data density, immunity to electromagnetic damage/EMP, and overall lifespan, all with the added benefit of inherent persistence of data with no power.

A friend asked me to put something on a DVD for them. I said "No problem." and then proceeded to try to master this DVD. DAMN, I don't miss doing that! I didn't have the software. Then, I wasn't sure if I had closed the disk. The media I had was old so I wasn't sure it was good...

What a pain in the ass.

Originally posted by Bozobub: Blu-Ray has been woefully obsolete, relative to the state of the art, for 5, if not 10 years or more.

Surely you are trolling when you say this. What percentage of the media content YOU watch is in UHD? 1080p is still excellent quality when it isn't poorly encoded or compressed like it is in most streams. UHD is being added to the Blu-ray standard by the end of the year and players could be a hot item this Christmas. If not, let me know where you are getting all your 4k from. It just isn't out there! Last I checked, Amazon Prime was the best place and they don't have crap.

First off, I quite agree, in that I simply don't bother with UHD; hell, even 720p is usually good enough for my purposes. Nor was I referring to the video quality of retail Blu-Ray movies. Rather, I was referring to data storage capacity and speed, the characteristics most people find critically important for any type of storage, followed closely by durability.

I probably should have phrased it better, in that commercially available Blu-Ray technology has been obsolete since before it was actually released to the public. This is not uncommon for tech in general, you know.