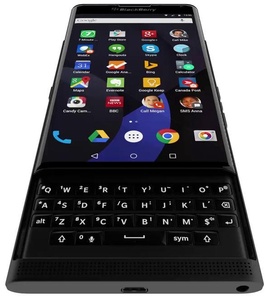 According to new reports, BlackBerry is preparing an Android smartphone for release this November on all the major U.S. carriers.
Codenamed the BlackBerry Venice, the device will be the company's first smartphone to not run on proprietary BlackBerry software.

The new leak comes via "retired" leaker Evan Blass who also posted a detailed picture of the device. If accurate, the Venice will be a slider that slides to expose a full tactile keyboard bringing back the most popular option for smartphones in 2009.

If the other piece of the report is also accurate (all four major carriers), that will be a huge boost for BlackBerry as the company has struggled to secure deals with all the carriers in the past especially since the carriers will no longer use marketing dollars on their devices.

In case there was any doubt... pic.twitter.com/yfFfyqEg5v

This should have started years ago. Better late than never, may prove already too late for Blackberry.


You're NOT the arbiter of "antiquity", homes. In fact, physical keyboards are preferred by a smaller, but significant subset of users. This explains why there's so many clip-on/"slip-on" keyboards currently on the market.
423.8.2015 21:53
biglo30
Send private message to this user
Senior Member

Smh blackberry did this to themselves. They had the market for years and instead of actually taking advantage and continue to innovvate and make the OS better they keep pushing out crappy OS updates after crappy OS updates. Its like nothing was changing except the number next to the "OS". 5-7 was there time to change things up and they did nothing, OS was always buggy and slow, now its biting them in the but.


You're NOT the arbiter of "antiquity", homes. In fact, physical keyboards are preferred by a smaller, but significant subset of users. This explains why there's so many clip-on/"slip-on" keyboards currently on the market.

Too right BBub. I absolutely love my old Droid 4 slider and receive favorable remarks on it wherever I go. NOT ONCE has anyone been negative. What the usual windbags fail to grasp is that sliders, apart from being comfortable, accurate and fast effectively extend the real estate of the screen whilst keeping the phone a comfortable size in your pocket. And no, I don't give a flying f*** about the phone being slightly thicker and less bendy.

This is a step in the right direction for BB and good luck to them. You could already load Android apps and the Playstore on the last BB OS, so why not give in and go the whole hog? This new model looks beautiful and I am seriously considering finally upgrading.