E-book sales get crushed after prices go up on Amazon 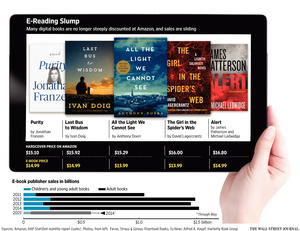 Over the past few months, e-book distributors have been signing new deals with e-commerce giant Amazon, and you've likely noticed that the prices of e-books have gone way up, almost in-line with what a physical book sells for.
While the publishers were likely happy that they got to price gouge (and Amazon could no longer discount), revenues have already taken a huge hit so the publishers' strategy has unsurprisingly backfired.

Majors Hachette Book Group, HarperCollins Publishers and Simon & Schuster all reported major declining e-book revenue in the last quarter. Hachette, for example, saw e-books fall to just 24 percent of its U.S. net revenue for the first 6 months of 2015, compared to 29 percent a year earlier. The company also had a large 7.8 percent drop in revenue for the period.

On the other hand, most of the publishers have claimed that lack of blockbuster titles have been the cause of declines but that remains to be seen.

The problem is simple: No one cares to subsidize nonexistent costs.

When you buy a book, you're buying a relatively complex, physical object. There are obvious costs anyone can recognize inherent in bringing ANY physical item to the consumer. If those costs don't exist (namely, all of the distribution costs of a book) then no one is going to be willing to pay the same as for a different format where the costs actually do exist.

In other words, distribution costs for an ebook are negligible, compared to a real book, and we all know it.

I remember a while back there was an issue with ebook price fixing. Having ebooks nearly the same price as a physical book is insane. People only started flocking to ebooks when it was substantially cheaper than the physical counterparts. If I had the choice of paying 10 bucks for a physical book or between 7-10 for an ebook I would go for the physical copy every time. I might have to utilize other sources for my ebook needs again...

the choir seems to be here.
i have long said that lower price means higher profits. but have you seen what they are blaming it on? NO BLOCKBUSTERS!
A blockbuster isn't defined by the content of the book but by the masses that read the book. if you decide to charge what it costs to feed me for a week to read your 6 hour book, i might decide to spend an extra 45 minutes eating my dinner instead.

sure you need a competent writer to write a passable book but $25 - $40 for a book is ridiculous, and as already pointed out elsewhere, an eBook has very little expense after it is available for sale. while fixed costs for printing, storing, mailing, and taking back returns can be a substantial percentage of the ridiculous price asked on a physical book, I doubt it is over one penny for an eBook. (although, with the sales drop because of the price increases, the cost is spread over fewer eBooks so it may have gone up a cent or two)

if you find yourself a "blockbuster" at $40 a book I'm betting you will make more by selling the eBook at $2.99 After all if fifteen people say yes to an eBook you've made $45 and if the book is good enough to pay $40 for paper copy then you will easily find 40x, 60x, 100x as many people willing to read it in a digital form