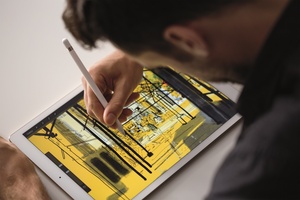 Under the hood it packs Apple's latest SoC, the A9X which boasts improvements over the A8X inside the iPad Air 2, including double the memory bandwidth. Apple decided to focus on its improvements over the A7 mostly though (iPad Air), claiming the A9X provides 2.5x faster CPU processing and 5x faster GPU processing over the A7. As for how much RAM is packed in the iPad Pro, honestly we have no idea right now but the suggestions around are that it has 2GB, just the iPad Air 2.

There isn't much to talk about in regard to camera improvements, the iPad Pro features the same 8MP iSight camera on the back and FaceTime HD camera on the front as the iPad Air 2.

It promises up to ten hours battery life (nine hours if you spend all of your time surfing) on a full charge.

iPad Pro will be available in November.

Also unveiled today was the Apple Pencil stylus, a pressure-sensitive stylus with internal sensors that can detect position, force and tilt, and is charged by the iPad's Lightning port. It is sold separately to the iPad Pro at a cost of $99.

Sounds really good, except that I'm a little bit disappointed that the pencil doesn't work in iPhone and why do you need 4 loudspeakers, I would gladly take couple of USB ports instead.

What a load of expensive crap.

Two years ---- old news. don't get sucked in. The black plague is upon us, actually already here. So dependent upon modern technology that we say "We are connecting closer to one another", when actually we are distancing ourselves more apart. Think about it.

Congratulations to Apple for inventing the Surface. Oh no, wait . . . .

Originally posted by SoTired: Congratulations to Apple for inventing the Surface. Oh no, wait . . . .

here how this thing sucks my note 10.1 was doing this before surface and this popped up and no need to charge the pen just out the box running and i have 128gb on it already tell me why i should care