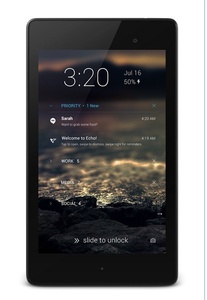 Microsoft has quietly acquired Double Labs, the developer behind the Android app Echo Notification Lockscreen.
The app, which has been downloaded over 2 million times, allows users to personalize the lock screen of their device, including sorting your notifications by categories of your choosing such as "social" or "priority."

Microsoft actually already has an Android lockscreen app, that is equally as popular as Echo, although aesthetically it cannot compete against Echo.

According to Microsoft Chief Experience Officer Julie Larson-Green, the new acquisition is about "[taking] productivity to the next level" and "[keeping] you in the moment." But what's wrong with the default lockscreen? "It's a list of what apps want you to know, not necessarily what's important to you," Larson-Green added.