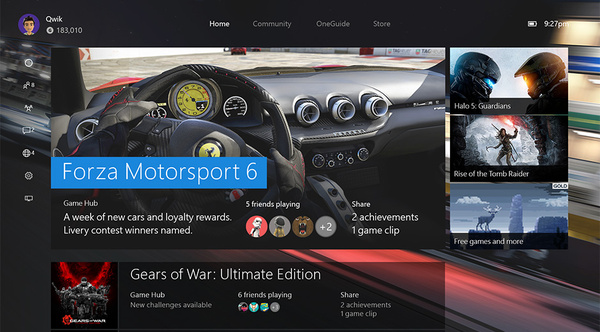 Microsoft has confirmed that gamers in the Xbox Preview Program will be able to test out the new Xbox One dashboard update before it launches in November.
"Because this is a significant update, we are giving Preview members the opportunity to decide for themselves if and how they want to participate in helping us release the New Xbox One Experience," said Mike Ybarra of the Xbox team.

Of note, Microsoft will not roll out the preview to everyone, at least not to start. "Preview members who have historically submitted the most feedback" will be the first to receive the update, with the ultimate goal "to start with a group, get feedback, then roll out to larger groups for additional feedback over time."

If you do choose to opt in, you will get regular updates up until the official release in November.

The November update will introduce a completely re-hauled user interface, new backward compatibility with over 100 Xbox 360 titles and smaller updates to the store and OneGuide. Additionally, there is a new 'Community' section which adds a ton of social features.

And because you fleeced your xbox preview members your going to fleece them again by limiting access to the preview and giving it to the most posts but your posts are so boring in your user feedback section that this move seems quite unfair to your gaming public.

"just this year alone Microsoft ripped off preview members when they told them to buy and test games for the xbox one compatibility update only to include the games with rare replay which left a sour taste in peoples mouths when they had just spent 150.00 to test games that basically where included in rare replay using the preview program for rares sales not giving a damn about there customer base" "Source: Xbox preview program Facebook"

"microsoft also told there preview members to purchase gears of war 1 for the 360 to test it in the preview and are going to include them in november to gamers that purchased gears of war ultimate edition for free" "Source: Xbox preview program Facebook"

So i guess Microsoft doesn't give two cents.