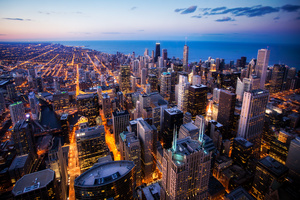 As we have reported in the past, some local municipalities have begun taxing streaming services like Netflix, Spotify, and Amazon in an effort to make up for lost revenue from physical disc sales.
Besides being controversial in its own right, at least one government now has a lawsuit on their hands. Subscribers to the popular services have filed a lawsuit against Chicago, claiming the 'cloud tax' is illegal.

Chicago was charging a 9% "Amusement Levy" on the services which had previously only applied to live shows such as concerts and baseball games.

In their suit, the plaintiffs claim that the tax could only have been imposed by a city vote, but in this case it was decisioned by the city comptroller. In addition, the suit claims that the tax violated the federal Internet Tax Freedom Act, which strictly prohibits states and cities from "imposing discriminatory internet-only taxes."

Read the full complaint here, as the decision will likely have national implications in the future.

So instead of joining the 21st century and figuring out a way to actually get on board with all this, they just try taking more money?

Of course! Blowing our money is what they do best! I can understand the hardship of lost revenues in physical media and might have pitty, but.... In this case maybe congress can balance a budget for once, and the State, Government, and politicians can start being more productive in efficient spending. I'm sure if they spent more time working on what they don't need to be spending they can find that lost revenue.

I still wonder how the State of Wisconsin is allowed to charge tax on internet service. It must be nice to be able to get around laws.