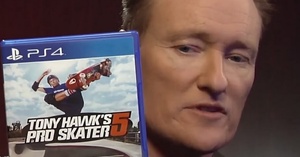 Late night TV host Conan O'Brien has updated his 'Clueless Gamer' series with the new Tony Hawk's Pro Skater 5, playing along hilariously with Tony Hawk himself and rapper Lil Wayne, who is also in the game.
The game is set for launch next week, and many early reviews have the game 'reviving' the series, which had flatlined since its early PS2 roots.

Besides getting back to its skating roots, it seems the game has added some extra fun, as well, such as 'Big Head Mode' where you have to keep doing tricks to not have your oversized head explode.