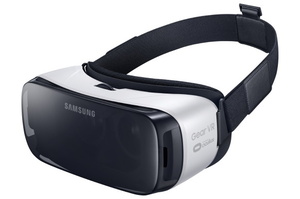 Samsung executive Peter Koo took to the stage at the Oculus Connect event this week, announcing the updated Gear VR, which apparently will be ready in time for Black Friday.
According to Koo, the new device will be available for their entire 2015 Galaxy lineup, including the Note 5, S6 Edge+, S6 and S6 Edge.

The new Gear is 22 percent lighter than its predecessor, has improved touchpad performance and will give users "access to an expanding universe of premium content" - although it is unclear what that content entails.

Most importantly, the price of the next generation Gear VR is just $99, an obvious play on getting more expensive smartphone buyers to add the "accessory."

So, unlike the other VR sets in our new era of virtualizing everything, this nonsense garbage only works with a Samsung device. Yay!

The Galaxy line is garbage and the Note is the only worthy device BUT.....WTF is someone gonna do with a VR headset that only works on a phone?????????

Are apps and games really that engaging on phones......NO


While I haven't really done research as of yet about this, anybody want to ring in about what kind of practical use the average user will get from the Samsung VR headset that only operates with Samsung devices????

I have a Galaxy S4, works better than anyone's phone I know. The Galaxy S2 and S3 of my fiance not so much. Every brand has it's own hit and misses.

This Samsung only addon is like all others. Companys make addon products to their addon products. If a third party made this it would most likely be universal. Why would Samsung spend the R&D to build a universal product only for other phone makers to come up with their own design? This saves them money and promotes the sale of their devices. It is not a new practice, not sure where the surprise is coming from.

I won't be buying this. I have a Rift. Cell phones do not currently offer the content for VR but it IS coming and even more so now that there is hardware to use it.

You could go buy the Google VR viewer. It is like $30 I think. I believe it works with any phone. If not grab a knife and fix it.

Guess your an ishite/iphone user then