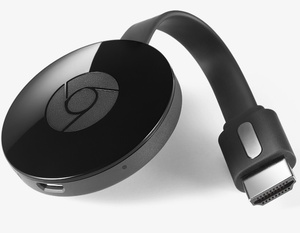 Alongside its bigger announcements, Google also unveiled a new second-generation Chromecast streaming dongle today.
Design-wise, Google has changed the device from a "stick" to a round disc that has an HDMI arm that extends out or sticks to the back when needed. The change in design was made so the dongle can hang further away from the TV and reduce interference.

The new Chromecast also support 802.11ac and 5Ghz bands (thank you Google) and the company says there are now three different antennas for optimized streaming compared to the one the original Chromecast had.

Google also boasted that there are now thousands of apps available that support casting, and Google has revamped the actual Chromecast app, adding a discovery section that searches for what is hot in the streaming apps you have downloaded on your devices.

The search giant says they have sold 20 million units of the original since its launch, quite a success for an experimental product, and the second-generation dongle will keep the original's $35 price tag so Google is hoping the strong sales will continue.

Bit of an expensive upgrade for a bit of extra cord and 802.11ac 5ghz and a round design methinks.

I'll stick to my current Chromecast I.

That cord better be detachable.....I don't need that disk dangling behind my TV.

Hard to justify a streaming device that doesn't support Amazon Prime. Hopefully they can work something out with Amazon. For now, I'll probably go with Roku or a FireTV for my next device.

I've been waiting for years to purchase a new version Chromecast and now we are left with this horrendous design of a Hockey Puck.

This sucks, I was so excited to finally get a Chromecast and I should have just purchased the first Gen version instead.

There is no way I would purchase this Hockey Puck design and I can't imagine anyone else pick this over the original.

it looks great to me

<p><a href="http://richgirls-studio.ro/">RichGirls Studio Videochat</a></p>
Comments have been disabled for this article.