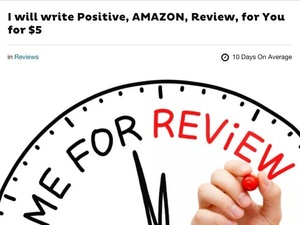 Amazon has sued 1114 John Doe defendants who are offering to write fake reviews via Fiverr, the site that allows you to purchase services for as low as $5.
The Fiverr sellers offered to write fake, positive product reviews for sellers and manufacturers, clearly tainting what is usually a pretty honest system.

"While small in number, these reviews can significantly undermine the trust that consumers and the vast majority of sellers and manufacturers place in Amazon, which in turn tarnishes Amazon's brand," said Amazon's complaint. The lawsuit only names the defendants by their Fiverr names, with the hope of being able to sue them by their legal names soon.

Amazon's own investigators emailed with the Fiverr users and found that some were willing to use multiple accounts, multiple addresses and different IP addresses to try to avoid detection by Amazon. Others were willing to receive an empty envelope from the seller so they could show up as "Verified Buyer" and also have a shipping record.

"Defendants are misleading Amazon's customers and tarnishing Amazon's brand for their own profit and the profit of a handful of dishonest sellers and manufacturers," added Amazon. "Amazon is bringing this action to protect its customers from this misconduct, by stopping defendants and uprooting the ecosystem in which they participate."

Fiverr is not named in the suit, and the two companies are working together to remove the listings and avoid such scams in the future.

Only a "verified purchaser" should be allowed to rate/comment in the first place. Or at least allow users a filter option. Verified, Non-Verified, All. With the default being "Verified".

If I saw verified purchasers rating an item 1-2 stars, and non-verified rating it 4-5, I would likely avoid it. Seems pretty simple.

In reality, only about 1% of all products are five-star products and one-star products. Yet, according to Amazon reviews, about half of everything is worthy of five stars. If McDonald's sold on Amazon it'd be a five-star restaurant. Really.

When verified realities lead us to anger, we must learn to reevaluate our beliefs.
318.10.2015 23:59
hearme0
Send private message to this user
Senior Member

In reality, only about 1% of all products are five-star products and one-star products. Yet, according to Amazon reviews, about half of everything is worthy of five stars. If McDonald's sold on Amazon it'd be a five-star restaurant. Really.


This is by far the most head-up-your-ass comment I've ever heard!

This is living according to the 'median' and that's tantamount to having blinders on.

Ah, the wit and wisdom of hearme0 finally targets me.

Since you've started off with an insult, it's likely you'll be subject to confirmation bias at this point and most of this will go over your head, but that's your problem. Anyway...

I'm not talking about only buying products that have four or two star reviews. I'm talking about the weight given to descriptive texts that provide information that help decide what the product is worth.

Star-wise, sure. It'd be dumb to only buy four, three or two-star products, but the information in the four to two-star reviews tends to be more reliable because it's more likely to avoid biases. I'm not saying all five and one-star reviews are useless, but they are more likely to carry deception. Ten reviews can be, and often are, undermined by a single well-written deceptive review.

How many professional reviewers give 100% and zero percent scores for things they review? Think about that, and then realize that the vast majority of reviews on Amazon award those scores.

Really, Amazon could do with a thumbs-up or thumbs-down system and most average consumers probably wouldn't notice.

You're looking at a product with over 1,000 reviews and you want the truth. At 1,000, the likelihood that at least a marginal percentage of them are paid-for and/or placed by company employees is quite high. And at the one-star point, It's very likely that a competing company will place fraudulent reviews. I'd prefer not to be influenced by such deceptive tactics and, really, sight-unseen, there's little to help detect it.

Four star, three star and two star reviews generally carry more in-depth information than five and one-star reviews because people that write them "get it." The one-star reviews in most cases are not well thought out and are knee-jerk reactions to failure.

After all that, I probably wouldn't buy a product that didn't get at least four and a half stars.

So, yeah, it's median, but it also helps avoids biases and deception. Your response is about as well thought out as those one-star reviews. If you have well thought out ideas, I'm all ears, but please keep nonsense to yourself.

When verified realities lead us to anger, we must learn to reevaluate our beliefs.
519.10.2015 16:28
ivymike
Send private message to this user
Member

Fiverr??? That sounds like the countdown to the famous nuke test in Operation Ivy.

I guess the better question is, since these people are getting paid no more than $5 to write a review, what damages could Amazon possibly receive from this? A two-fer?

This is just a scare tactic. Amazon would have to prove damages and I think it would be very difficult to prove what a review is worth. Considering most are charging $5 apparently not much.