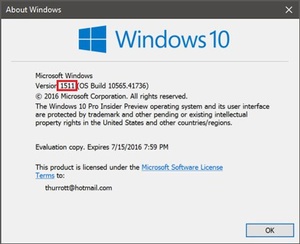 According to Windows insider Paul Thurrott, the Windows 10 Fall Update is slated for release next month.
Windows 10 build 1511 will be available to all Windows 7, 8.1 and Windows 10 users, and you won't have to reactive your Windows after the update.

The update comes with an improved Media Creation Tool (for backing up Windows), new features for Cortana, improvements for Edge and a ton of bug fixes.

You can see some more changes at the source.

Only a Ton of bug fixes?. Guess they didn't fix all of them!.

Originally posted by sikosrus: Only a Ton of bug fixes?. Guess they didn't fix all of them!.


When it's still pretty much beta software, there's gonna be lots of bug fixes...and enabling broken features and adding features that should have been there to begin with.
Comments have been disabled for this article.