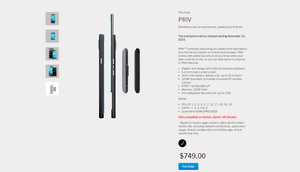 Thanks to a couple of retailer leaks, we have the specs and price for the upcoming Android-powered BlackBerry Priv.
BlackBerry has been releasing minimal information about the device, but leakers like Evan Blass have outed the design through full mock ups.

While the specs are pretty nice, the leaked price is shocking. The pages show a $749 price tag for North America and £580 for the UK, which makes the Priv more expensive than a few iPhones and the Galaxy S6 Edge. It is also hundreds of dollars more expensive than the newly launched Google Nexus 6P.

It is nice to see BlackBerry thinking outside of the box, and I'm sure there are plenty of consumers still willing to take a physical keyboard but at that price tag BlackBerry has once again shot themselves in the foot.

yes i noticed that, biggest sd card is 128, and price hahaha who wants to buy