Samsung takes on iPad Pro with a monstrous Galaxy View 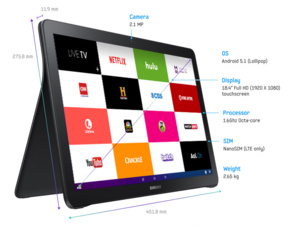 Samsung has teased us earlier with a new Galaxy tablet and finally couple days ago we got some leaked good quality pictures of what is a massive slate. It was leaked by the leakster like none other, Evan Blass, but now shortly after Samsung has made it official.
Galaxy View is a tablet that is not meant for travel. You would be hard-pressed to call it mobile really, and it comes with a kickstand for a reason. The reason being its humongous 18,4 inch display that has a Full HD resolution. The display dwarfs that of the iPad Pro which "only" has a 12,9 inch touchscreen.

The other details include a 2,1 megapixel front-facing camera, octacore chipset, 2 gigs of RAM and 32 or 64 gigs of storage expandable with a microSD card. There's both a WiFi and an LTE version but Samsung hasn't yet revealed the pricing or the availability. Leaks have previously suggested that the cheapest 32 GB version would retail for $599.


Tweet
Tags: Samsung Samsung Galaxy View
<IBM to spend billions to get in the weather data business >Facebook will slow down employee's Internet on Tuesdays so they can better understand emerging markets
Previous Next

I wonder what OS it is going to be? Not that I think it will be a large demand but how cool is it that people have it as a choice.

that's pretty poor for a NEW tablet. 2.1!! megapixel camera?? for goodness sake will you give something half decent! just go for a bare min of 8mp. 32 or 64gb storage?! boring!!! so BORING!!! this is the same specs from years ago! come on Samsung don't be like Apple! give something decent to the consumer! why not make it 128 or 256gb as standard! expandable memory means nothing you know that! especially as most of the apps run from the tablet itself. No mention of pixel rate, which I hope isn't as disappointing. As far Apple Ipad Pro?? Apple can go **** itself.

Originally posted by lamain: I wonder what OS it is going to be? Not that I think it will be a large demand but how cool is it that people have it as a choice.

I thought I read in this article what the OS was but I guess it was another article elsewhere. The OS is going to be Lollipop 5.1.
I can't see Samsung doing a Windows tablet now lol.
ahhhhh!!! cobras
Comments have been disabled for this article.