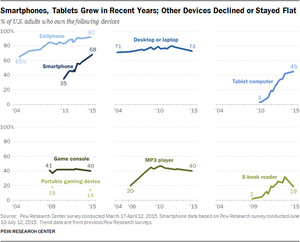 According to the latest figures from Pew Research, 68 percent of American adults have smartphones now, and 45 percent have tablets.
The figures are significant since in 2011 the smartphone figure was 35 percent and the tablet figure was almost non-existent.

Breaking down the smartphone number further, we have 86 percent ownership for the 18-29 age group, and 83 percent for those in the age 30-49 range.

In total, mobile phone ownership is almost fully saturated, with 92 percent of American adults owning a mobile phone of some kind.