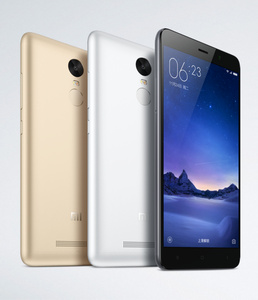 Giant Chinese smartphone OEM Xiaomi has launched their first all-metal devices this week, the Redmi Note 3 and the Mi Pad 2.
The Note has a 5.5-inch 1080p display, runs on the MIUI 7 operating system and is powered by a MediaTek Helio X10 processor and 2GB RAM. The phone has dual cameras (13MP/5MP), has dual-SIM support, 16GB or 32GB of internal storage and a huge 4000 mAh battery. Additionally, the phone has a fingerprint scanner.

Second, the company revealed their 7.9-inch Mi Pad 2 tablet, a device which promises to be much thinner and lighter than its predecessor at 6.95mm and 322g.

The Mi Pad 2 has an Intel Atom quad-core 2.24GHz processor and 2GB RAM to power the 2048×1536 pixel display. The device has a gigantic 6,190mAh battery, dual cameras, and a USB-C port. Interestingly, the device has a reading mode that specifically cuts down on blue light to avoid eye strain.

Both devices go on sale in China on November 27th, but don't expect them in the U.S.

Source:
TNW
Tweet
Tags: China smartphone tablet Xiaomi
<T-Mobile to offer three months of unlimited LTE for free if you opt into 'Binge On' >Adele's '25' is streaming on Pandora
Previous Next

The phone looks smart and good price point, even for a second phone