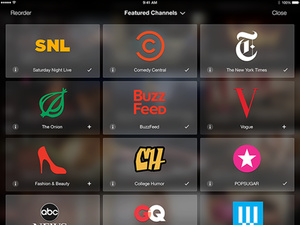 Yahoo has shut down is video portal Yahoo Screen, two years after it was launched to tie together Yahoo's original and syndication programming.
The site was home to the last season of former NBC hit "Community," Sci-fi comedy "Other Space" and "Sin City Saints" as well as the home of the first live-streamed NFL broadcast from London and streaming concerts via a partnership with Live Nation. Screen also had channels in partnership with media giants like Viacom, who supplied clips from Comedy Central, for example.

Earlier this year, Yahoo took a massive $42 million writedown for its Screen division, with executives citing 'Community' specifically for not bringing in the ad money they expected it would. The company also struggled to make the content easily accessible on devices that consumers have become accustomed to using, such as consoles.

All of Yahoo Screen's 1000 hours of content have migrated to Yahoo's other sections.

Didn't even know of this.