Android Marshmallow is still only installed on 1.2 percent of devices 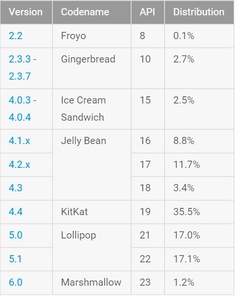 Google's latest operating system is still being used by an insignificant amount of users.
Android 6.0 Marshmallow is installed on just 1.2 percent of devices, placing it well behind all other Android versions including Android 2.3, an operating system launched in 2011.

Google reveals the figures every month, hashing out the market share by checking which devices visited the Google Play Store during a seven-day period.

The low numbers are not completely unsurprising. As of writing, the OS is only available on the Nexus 5, Nexus 5X, Nexus 6P and LG G4, although a number of other manufacturers including Samsung have announced roadmaps to upgrade early this year.

Android 5.x Lollipop is up to 34.1 percent share, right behind the aging Android 4.4 KitKat at 35.5 percent, which is an encouraging sign, at least.

Source:
Google
Tweet
Tags: Google Android Android 6.0 Marshmallow
<Xiaomi denies its phones will be available in the U.S. officially >Yahoo has written down the value of Tumblr by $230 million
Previous Next

What's the damn point of re-innovating your proprietary OS to a seriously limited audience??

I hate Android. Been w/o cell for almost 3 years. NEVER LOOKING BACK.

However, work provides one but I never bring it with unless biz-related.

Ditch your cell and remember what it's like to socialize and be aware of your surroundings!