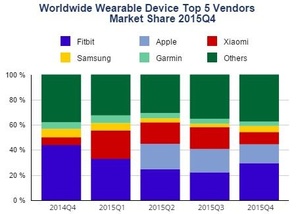 According to research firm IDC, Apple shipped 11.6 million Apple Watches in 2015, including 4.1 million in the final quarter.
Apple does not disclose Watch sales as a standalone number, instead hiding it within the "Other Products" category that includes Apple TV and other hardware and software.

In the larger wearables market, Apple was third behind Fitbit and Xiaomi, although both those companies sell devices that are often one-third the price of even the cheapest Apple Watch. Fitbit sold 21 million units for the year, and Xiaomi shipped 12 million units.

"Triple-digit growth highlights growing interest in the wearables market from both end-users and vendors," noted Ramon Llamas, Research Manager for IDC's Wearables team. "It shows that wearables are not just for the technophiles and early adopters; wearables can exist and are welcome in the mass market. And since wearables have yet to fully penetrate the mass market, there is still plenty of room for growth in multiple vectors: new vendors, form factors, applications, and use cases. This will help propel the market further."