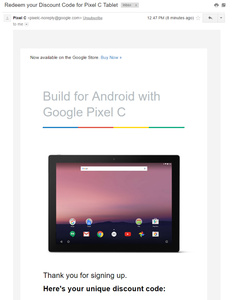 In celebrating their early release of Android N, Google has also dropped the price of the Pixel C Android tablet.
The tablet will be 25 percent cheaper with a special discount code, and that code is good for the 32GB and 64GB variants.

Google is the only seller of the Pixel C, meaning you aren't going to get it any cheaper elsewhere (except maybe on eBay or other second-hand stores) and the specs of the Pixel C (which will run Android N out of the gate if you want to test it) are pretty spectacular.

The tablet has a 10.2-inch LTPS LCD at 2560 x 1800, 500 nit brightness, is powered by an NVIDIA Tegra X1 and a 256 core Maxwell GPU and 3GB RAM. If you use tablet cameras, there are dual 8MP/2MP, and the above-mentioned internal storage options. Battery life shouldn't be an issue thanks to the 9243 mAh battery to power it all.