Google has announced that Android Pay will be headed to the UK in the coming months, following major delays. 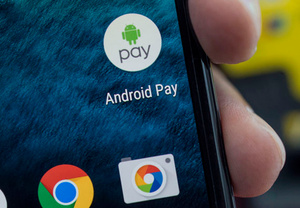 Google has announced that Android Pay will be headed to the UK in the coming months, following major delays.
Says Google: "Android Pay will support MasterCard and Visa credit and debit cards from many of the UK's major financial institutions -- including Bank of Scotland, First Direct, Halifax, HSBC, Lloyds Bank, M&S Bank, MBNA and Nationwide Building Society -- with new banks being added all the time.

You will be able to use Android Pay everywhere contactless payments are accepted, including your favorite places at which to shop and eat every day, such as Boots, Costa Coffee, Waitrose, and more. You can also tap and pay as you go across London on the Tube, buses and trains, using Android Pay with Transport for London (TfL).

Android Pay will help you speed through checkout within your favorite apps including JD Sports, Deliveroo, YPlan, and more. Say goodbye to entering your payment or address details every time you want to shop."

The company continues to work with processors, banks, tech providers and payment platforms in the UK so there are likely to be more announcements before the launch.