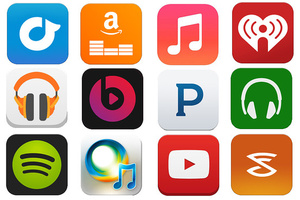 The RIAA has announced that revenue from streaming has surpassed digital for the first time ever.
In 2015, streaming accounted for $2.4 billion in sales, ahead of digital downloads.

Overall, the industry saw a small 0.9 percent increase in sales to $7 billion, one of the few times the industry has seen any growth in quite some time.

"In 2015, digital music subscription services reached new all-time highs, generating more than $1 billion in revenues for the first time, and averaging nearly 11 million paid subscriptions for the year," RIAA CEO Cary Sherman said in a memo. "Heading into 2016, the number of subscriptions swelled even higher -- more than 13 million by the end of December -- holding great promise for this year."

Of course, the RIAA is never happy and used the announcement to also argue that ad-supported streaming does not pay the artists (at least not much). "The consumption of music is skyrocketing but revenues for creators have not kept pace," Sherman wrote. "In 2015, fans listened to hundreds of billions of audio and video music streams through on-demand ad-supported digital services like YouTube, but revenues from such services have been meager  --  far less than other kinds of music services."

Ad-supported streaming brought in $385 million in 2015, while vinyl sales made $416 million, added the RIAA, a generally shocking figure given the billions of streams annually made on YouTube or via Spotify.

What does the RIAA care about paying the artists??? Pot or kettle anyone?

Originally posted by ivymike: What does the RIAA care about paying the artists??? Pot or kettle anyone?

I couldn't agree more. The riaa are nothing more than self serving arses who couldn't even bring themselves to decently feign concern for the artists.

Originally posted by ivymike: What does the RIAA care about paying the artists??? Pot or kettle anyone?

If the labels don't get paid, neither does the RIAA. That's all those vampires care about.
AfterDawn News
AfterDawn Guides
One of the largest collections of software on the Web: AfterDawn Software Section
426.3.2016 11:52
hearme0
Send private message to this user
Senior Member

Again, musicians makes their money on touring only. Album sales only equates to measuring the fanbase.

The RIAA has no purpose any longer!

They should be disbanded and if they refuse...publicly shamed till thoughts of offing themselves circle around their useless heads!