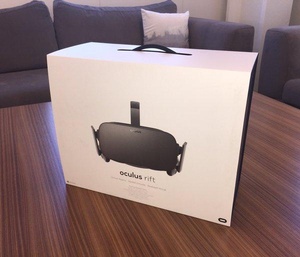 Oculus CEO Brendan Iribe has announced that the first Oculus Rift consumer models have begun shipping, and some lucky buyers will have theirs as early as Monday.
Consumers have been anxiously awaiting the consumer model VR headset, following years of research and development and developer models.

The Rift sells for $600 and is currently back-ordered, meaning if you buy now you won't get yours until July.

For a list of the games available at launch for your Oculus Rift, check here: Afterdawn
Tweet
Tags: Oculus Rift VR
<Foxconn agrees to buy Sharp for $4 billion >Sources: Microsoft willing to back bidders for Yahoo
Previous Next

Some uniformity is gonna be needed here for this industry to succeed. MOst households don't have both a PS4 and an XBox let alone a PC for prime gaming and possibly and Wii-U.

That same logic makes me think that most won't pop 600 for an Oculus plus games then another 800 for the VIVE plus games and whomever else makes a decent headset.


Hololens is still the most attractive idea to date. Can't wait for that one. I'll pop a grand on that in a heartbeat if it's ready for primetime.

Just my opinion but if I'm gonna buy a VR headset, it better have UHD naked eye type resolution.