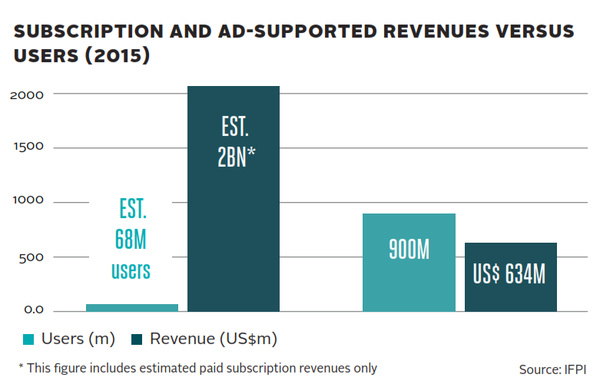 Peter Mensch, who has managed many huge acts including Metallica, Muse, Snow Patrol and more, described YouTube as 'the devil' to BBC Radio Four.
Mensch argued on the programme that the model offered by YouTube to artists (placing ads around their music content) was unsustainable. "If someone doesn't do something about YouTube, we're screwed," he said. "It's over. Someone turn off the lights."

His comments channel the findings of an IFPI report which warned about a widening value gap between the volume of music consumed on YouTube, SoundCloud and other user-upload services, and the amount of revenue generated as a result. Specifically, it it estimated that 900 million consumers on those sites generated around $634 million for the music industry last year, whereas 68 million subscribers of paid services generated around $2 billion.

Defending itself, YouTube says it has paid out over $3 billion to the music industry, though it didn't provide a timeframe. YouTube Chief Business Officer Robert Kyncl responded to Peter Mensch's comments by citing agreements artists have with record companies, and how their income compares to those who are signed up directly with YouTube and paid directly.

"The artists who are signed up directly with YouTube are seeing great returns," he said.

"Not everybody - but if you're generating a lot of viewership, you're making a lot of money."

As an example he cited artist Lindsey Stirling, who is set up directly with YouTube and has more than 7.8 million subscribers. Last year, Stirling made more than $6 million from the service.

Wah wah wah - you all live a better lifestyle than 98% of us on Earth so to say you are screwed - then you may as well go suck it while you at it.

It's the same model as radio. That hasn't killed the music industry.

Hardly any of the revenue from music distribution goes to the artists. The musicians make money touring. Touring works because people want to seen the artists they enjoy listening to. Any "model" that gets music in front of fans so that they will want to buy concert tickets is a model that increases the amount of money artists make.

The labels and producers are the ones who lose when the revenue shifts toward concerts and away from record sales. And so they brainwash artists into thinking that the artists' fortunes are tied to the labels' and producers' fortunes.

What a mistake mentioning that the "manager of Metallica" doesn't like this.

Metallica single-handedly brought down Napster (thank Lars!) and I need to remind Metallica and EVERYONE ELSE that money for musicians is NOT made on sales of albums but on touring...PERIOD.

Let's rephrase that; An artist will make way more money on a 35 dollar T-shirt and 60 dollar hoodie being sold in the TENS of THOUSANDS than 7 cents an album and then splitting that with the record labels.

"If someone doesn't do something about YouTube, we're screwed,"

Maybe people like you that have been profiting off other people's work for a living will have to get off your fat ass and do something.

The way things are going gives more independence to the Artist, so naturally people like him are crying foul.

The manager of the biggest hypocrite band ever has zero credibility when it comes to stuff like this. Or anything for that matter.