Earlier this week, Google announced that its Pixel and Pixel XL smartphones have sold out of pre-orders, with demand much higher than expectations.
Due to the lack of supply, shipments have been delayed and Google is sending affected customers some Play Store credits to apologize.

If your phone is not being shipped by its promised date, you should be receiving an email with $50 of store credit, which can be used on media like movies, music, and apps.

See the attached screenshot of emails that affected users have received: 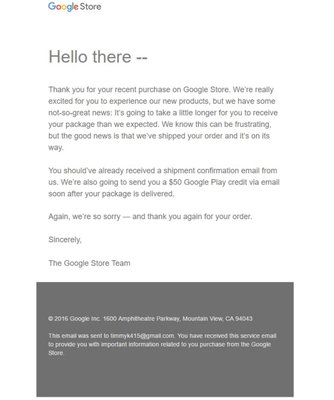 Garbage, run-of-the-mill phone that excels with only its camera.

FOLKS!...........we are now officially in the phone-camera race. Just as Pixel did with its other features by neglecting them, so will MANY others soon enough.

Run-of-the-mill phones with phenomenal cameras. That's a hell of a trade off if you ask me. Not sure which I'd choose; great phone with damn good camera or mediocre phone with a PIMP camera.............

Originally posted by hearme0: Garbage, run-of-the-mill phone that excels with only its camera.

Not sure which I'd choose; great phone with damn good camera or mediocre phone with a PIMP camera.............

It does lack waterproofing and an SD slot. If you need those, then sure, this isn't the right phone for you. But most of us don't need either, so I would hardly call those the features that separate great phones from garbage phones.
Comments have been disabled for this article.