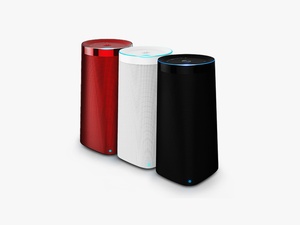 Amazon might have been one of the first ones to integrate a voice assistant to a home entertainment speaker but is it not alone. Google's new Home is almost a carbon copy of Echo but uses Google's own Assistant to answer your questions and fulfill your demands.
Another new assistant speaker to take on the two is LingLong DingDong. No, it's not an Onion product playing on stereotypes but instead an actual product coming from China. It works with your voice just like Echo and for example serves you information about the weather, plays your favorite music or adds appointments to your calendar.

As Google's and Amazon's products are limited in their language support there certainly is room for another device that works in Chinese. And according to the company, called Beijing LingLong, they started the development before Amazon released Echo.

Even though LingLong DingDong might be successful thanks to the large Chinese market it is far from especially Google's offering. DingDong doesn't support AI like its competitors and thus it does not understand the natural language as well.
Tweet
Tags: Amazon Echo Google Home
<Domino's is replacing delivery personnel with flying robots >Rumor: Samsung to sell its laptop business
Previous Next

Soon I discovered that this rock thing was true
Jerry lee Lewis was the devil
Jesus was an architect previous to his career as a prophet
All of a sudden, I found myself in love with the world
So there was only one thing that I could do
Was ding a ding dang my dang a long ling long

A billion point 4 people in that God forsaken country........INVENT YOUR OWN STUFF!

And what they do make.....in general, is sub-par CRAP!

Um... Yeah.
You use paper, right? Did you think that was invented in the US? lol

It's not that China never invented anything; it's that China has been behind the ball since the CCP took control and killed off most of the intellectuals, engineers, doctors, historians, and anyone else who wasn't a dirt-poor ignorant dolt happy to follow the party line (some intelligent people did survive, but only if they pretended to be ignorant farmers or if they joined the party). Even today people are being arrested for meditation, their organs harvested for money. Simply doing research is often illegal as one must circumvent government firewalls blocking entire websites because of one post that was made one time 5 years ago. Plus, china really doesn't have any kind of IP law, so there is no incentive to be creative. It's actually pretty amazing how much the people of china are able to do given those circumstances.