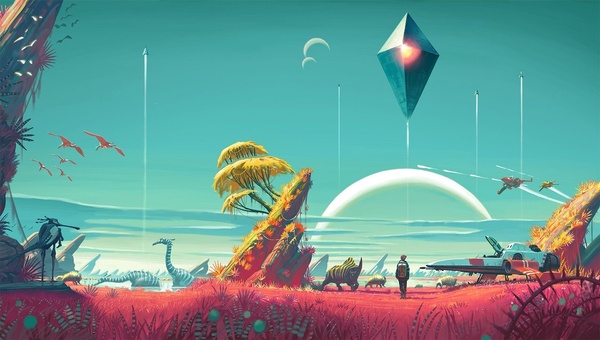 The Advertising Standards Authority (ASA) in the UK has cleared Hello Games, the developer of No Man's Sky, of false advertising following complaints from players.
Many players were very underwhelmed with the product they purchased and felt they had been misled by Hello Games, pointing to the screenshots and videos that were put out ahead of the game's release. The Advertising Standards Authority (ASA) received enough complaints in the UK to prompt its own investigation, and has now issued its verdict.

The ASA has found that the content put out ahead of release and its Steam page were largely representative of the final product, and unlikely to have mislead customers. Some differences between the trailer and the final product were noted by the ASA, but were not deemed significant deviations by the regulator.

A recent "Foundation" update to No Man's Sky was positively received and reportedly brought thousands of disgruntled players back to playing, at least initially.

You van view the ASA's final report on its investigation of No Man's Sky on its website.
Tweet
Tags: No Man's Sky
<Brits will soon get Piracy Alerts from ISPs >Trump election prompts Archive.org to plan Canadian website
Previous Next

Played this game for about 2-3 hours and wasn't all that impressed. It felt empty, hollow and not nearly as fantastic as they made it sound, but who doesn't do that?
I'm glad I didn't pay $59.99 for it. I might take another look once it's sub $20, but it's not worth anything more.

Currently playing Fallout 4, Overwatch (Best Reinhardt there is!), Rise of the Tombraider, and Splinter Cell Blacklist.

I will likely NEVER play this lame ass game. It truly appears, as previously stated, "empty". It's bland, boring and repetitive gameplay searching around a universe that the creators probably use a template to create the millions of worlds to find.....well.....pretty much nothing, just doesn't seem like it's worth 60 bucks.

I picked it up for $35 thinking I got a deal...silly me. There does seem to be some kind of goal other than maxing out your character, but I really haven't figured out what it is...something about going somewhere or finding someone or finding two other people, not sure why for any of it...I guess just because there's nothing else to do. Maybe it would make more sense if I spoke one of the foreign languages but you have to learn them one word at a time and there are at least 3. Plus the ship controls really suck...thought it might at least be fun to do space battles with a joystick but it actually controls less terribly with a mouse. About my only reason to play it anymore is that I want to upgrade my weapons and go full on space-pirate...but something tells me even that will be boring.