Apple's original TV show Planet of the Apps gets a trailer 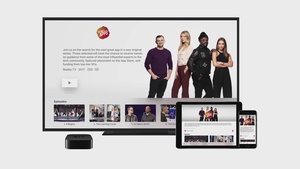 Apple has positioned itself against some of the biggest TV and movie conglomerates by beginning the production of its own content. Following Netflix's and Amazon's lead, the Cupertino based giant has released a trailer of one of its first original TV shows.
The show is aptly called Planet of the Apps and is to applications what Shark Tank is to business ideas. Well, actually, it is a combination of Shark Tank in terms of pitching the idea of the app and The Voice in which the celebrity judges choose whether they want to help out the pitcher.

As the video shows, the pitch to the celebrity judges (Jessica Alba, will.i.am, Gwyneth Paltrow, and Gary Vaynerchuk) is just the first step. If they are accepted by one – or if many, they can choose their mentor – they must prepare for a pitch to four members of venture capital firm Lightspeed Venture Partners.

The best will get a featured spot on the App Store (obviously) and a lot of publicity. The show will be exclusive to Apple Music.


Tweet
Tags: Apple Apple Music Planet of the Apps
<Cortana reminds you even when you forgot to add the reminder >Samsung's reputation in free fall after exploding phones
Previous Next


Apple, Netflix, Yahoo, Amazon and others are just TRYING THEIR ASSES OFF to get people to 'watch' their content which is so counterproductive to what people NEED to do.......which is pull their heads out of their asses, or phones/computers and stop engaging in so much tv watching. Pay attention! Go outside! Get a girlfriend/boyfriend but GOD help us............watching more and more and more television is not what brightens a society up.

Typical apple style. Stealing other peoples ideas and calling them their own.

It's actually brilliant in a way; the sort of person who buys Apple products is the target audience of all these shows. Plus I bet there is something in the contract saying all apps are Apple exclusives even if they don't get selected.

Hopefully they develop more original content. I really like what Netflix is doing already so this should be good competition.

Originally posted by pcrazy99: Hopefully they develop more original content. I really like what Netflix is doing already so this should be good competition.

LoL...good luck with that! They made a show about iPhone apps that is only available to Apple users; they didn't make House of Cards that is available to everyone right down to people who only have a PS3, Xbox360, or cheap-o set-top.
Comments have been disabled for this article.