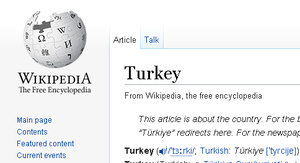 The Turkish authorities have blocked access to Wikipedia, citing a 'smear campaign' against the country.
The block was announced by the BTK telecommunications watchdog, citing a law that allows it to block access to content on the Internet if it is deemed a threat to national security, or if it is obscene. Wikipedia.org has been blocked by the authorities on the grounds that it is engaged in a smear campaign against Turkey by linking the country to militant groups.

"Instead of coordinating against terrorism, it has become part of an information source which is running a smear campaign against Turkey in the international arena," Anadolu, a state-controlled news organization, reported.

The ban will only be lifted if the online encyclopaedia complies with demands from the Turkish government, according to the Reuters news agency.

Censorship of this kind is likely to concern rights' campaigners who have blown the whistle on infringements on freedom of speech and other rights in Turkey in the past year.
Tweet
Tags: Wikipedia
<Facebook homepage listed in takedown notice over football piracy >PlayStation 5 could arrive in 2018?
Previous Next
Comments have been disabled for this article.