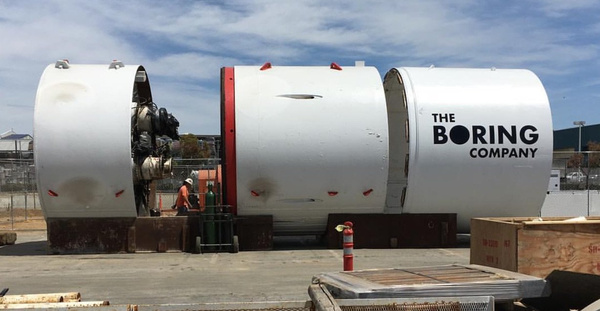 Mr Musk's 'Boring Company' has shown a concept video for a subterranean network of tunnels that zips cars from place to place.
If you have spent time listening to Elon Musk opine, then you probably have heard him passionately complaining about traffic. The SpaceX & Tesla Motors CEO had tweeted last year that he was going to avoid traffic by getting a tunnel boring machine.

Apparently, it wasn't just a passing thought that Elon decided to tweet to the world, but a statement of intent. A SpaceX employee recently leaked a picture of a tunnel boring machine with a company logo for "The Boring Company" painted on. The photo was taken down but not before Business Insider grabbed and re-posted it.

Last week, 'The Boring Company' released a concept video. In the mock up, cars are seen parking on a street-level platform before being lowered into a tunnel and whisked off at high speed to a location and being elevated to the street.

Here is that video:


The reaction to the video has been mixed, with some claiming such a solution would be plagued by problems, while others ask what the benefit is over a subway (well, besides the fact that you can't take your car on the subway!).

Whether it becomes reality and solves a problem, or is a colossal failure, it should be interesting to witness it progress. Happy Boring, Elon!
Tweet
Tags: Elon Musk The Boring Company
<PlayStation 5 could arrive in 2018? >WATCH: SpaceX rocket landing as you've never seen one before
Previous Next

Is this what happens to visionary minds? ...that at some point they go off on some folly blowing all the cash they made on previous successes :)

This would be insanely dangerous and expensive to create. It could not be implemented into any city currently with a dedicated underground rail. It would conflict with current transit option, and leave the poor, working poor with no vehicle of their own stranded (if they intended to replace current subway tunnels).

Anyone who has driven in LA traffic has had that moment...usually it passes before buying a boring company. Maybe he will end up using the machines to make some tunnels under the parts of I5 where there are tall hills that make a Tesla say the remaining charge is only good for 5 miles.