WATCH: SpaceX rocket landing as you've never seen one before 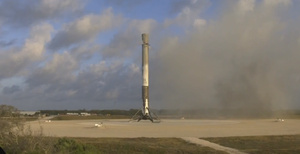 SpaceX video shows the landing of the rocket booster right from stage separation to the landing zone, both from the ground and from the rocket itself.
Videos showing SpaceX landing the booster stage of its Falcon 9 rockets are not new, but this webcast is clearly their best yet. It was broadcast today, covering the NROL-76 launch. Due the classified nature of the mission, SpaceX did not broadcast video of the second stage.

This presented the rocket firm with an opportunity however, to broadcast the landing of the first stage of the rocket from stage separation back to the surface of Earth. In a split-screen broadcast, SpaceX tracked the booster as it fell at high speed toward the Earth, oriented itself and slowed itself down to land safely. It also had an onboard camera as before.

The landing was a success and the video footage, as well as the detailed narration, gives the rest of us an idea of how tricky this manoeuvre is.

Watch the NROL-76 Launch Webcast below (the launch happens around 17:50 into the video).

I personally find this astounding.

I think the two video feeds are out of sync with the right side a few seconds after the left... a bit disconcerting.