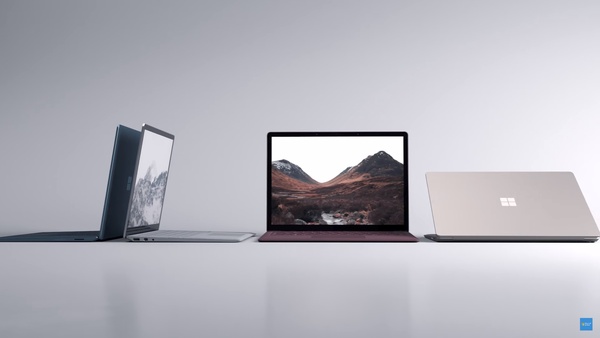 Microsoft unveiled yesterday the new Windows 10 S operating system which in effect is a lite version of company's flagship product. Also revealed was the first traditional laptop to come out of Redmond.
It was quickly argued that the biggest problem of the laptop is the operating system that cripples such a well equipped and at least seemingly well built machine. Windows 10 S allows app installs only from the Windows Store and therefore millions of programs are not available for the system.

Fortunately The Verge has found out that Surface Laptop owners will be able to upgrade to Windows 10 Pro for free. Normally the fee is $49, which to be honest, doesn't sound too bad, considering the improvement that comes with app freedom.

This deal only lasts for the rest of the year, though, and if you are buying some other Windows 10 S product you are out of luck and have to shell out the money if you want to upgrade.

Microsoft also is giving away one year license of Office 365, which is coming to the Windows Store, with Surface Laptop.
Tweet
Tags: Windows 10 Microsoft Surface Laptop Windows 10 S
<Microsoft unveils Surface Laptop: Lighter, thinner, and faster than MacBook Air >YouTube is revamping its UI, adds Dark Mode, and you can try it out now
Previous Next

Apparently the Surface RT debacle was an insufficient lesson.

Apparently the Surface RT debacle was an insufficient lesson.

It is designed to be a low-end laptop; you can get similar hardware (admittedly in a slightly thicker package) for about half the price. They are marketing it as a chrome-book alternative; talking about taking notes and running basic office type stuff. Their big push seems to be towards future college students (maybe because they have not taken intro to economics yet?). For some it will do just fine...although students in programs that use video editing or CAD software will be pretty disappointed even if they can install their software suites. It sort of makes sense to have a crummy version of Windows...it keeps users from being disappointed at the performance when they install anything that requires the kind of power you would expect from a $1000 laptop.

If the intent is to compete with Apple, it is a big fail. I've asked a few students who have macbooks the answer is always something like, "I don't know anything about computers so I just got my parents to buy the most expensive thing I could find." If that's the market Microsoft is going after, then it's too cheap.

What I do know is that if this is good enough for whatever program a student is enrolled in, then so is a $200 budget book. That leftover $800 could buy a lot of pizza and beer...assuming the student is paying as opposed to their parents. If it isn't good enough then either the laptop is only good until the first week of class or the student spends the next 4 years doing homework on campus instead of in the dorms.

Considering how much that Microsoft charges for the Surface line of laptops and tablets, this upgrade better be free.

Windows 10 is supposed to be an incentive to buy a computer ? Not me !

It certainly is, if you already have a number of apps/games (and often devices) that only work under Windows, which is the case for every previous Windows owner. No use case, of course, is universal.

This is especially the case re: peripherals and device drivers. Linux simply doesn't have the same driver support Windows does.

Originally posted by Bozobub: It certainly is, if you already have a number of apps/games (and often devices) that only work under Windows, which is the case for every previous Windows owner. No use case, of course, is universal.

This is especially the case re: peripherals and device drivers. Linux simply doesn't have the same driver support Windows does.

It is slow and stinks ! I'm glad you like it. If I want an app I use my phone.

Where did I say I "like" Windows? Furthermore, "app" is merely short for "application", and means "any program that isn't a game".

Care to try that again? Except this time, maybe with a counterpoint or two?

I think he was talking more about how Windows 10 isn't as good as Windows 7, as opposed to saying ChromeOS/Linux/OSX/Etc is better.

Personally I still prefer Windows 7 in spite of it showing age due to lack of much needed fixes pretty bad at this point. However, after buying my new laptop I was forced to go to Windows 10 because the only Windows 7 drivers were very buggy beta versions. I managed to get a copy of educational edition and after a good number of registry and group policy mods it is actually pretty decent. I'd still prefer Windows 7 but it is a very workable solution. Ignoring all the modifications I had to do to get it working well and the fact that I had to buy a new version of one program, my biggest complaint is simply that I was forced to use it.

That said, most IT departments don't bother doing fixes and most institutions (even most schools) don't use the educational edition (most end users don't have access to it either). At my college, they use Windows 10 professional...it is so slow that teachers tell students to arrive to class 10 minutes early just so they can be logged in before class starts. This is on hardware that went from cold boot to desktop in under a minute with Windows 7. It isn't just that one IT department either; I have heard a lot of complaints from incompetent IT guys talking about how i5's can't even run Excel and Word anymore after the switch. Since Microsoft is basically forcing people to go to Windows 10, it would be nice if they included the fixes instead of forcing IT and system builders to make them...because generally they don't and it just makes Windows 10 seem far worse to the end users. Also, they shouldn't be restricting the best version (education) to just educational institutions. They could call it Pro+ or something and it would probably be very popular, at least with enthusiasts and companies where they want employees to be as productive as possible (all of them).

One other big thing...I had to buy a new version of one program that wouldn't run on Windows 7 but otherwise everything works. The program in question is called CATIA...a CAD package that is $100 for students like me, but that could be tens of thousands of dollars per seat for a corporation. I know of at least one local company that canceled their hardware upgrade cycle because (for them) the only new feature that they would get from the new version would be Windows 10 support. This particular package won't even run in a virtual machine. I am not sure if this is affecting other big dollar packages from other industries but it seems entirely possible. It's total crap that Microsoft is getting Intel and AMD to not release Windows 7 drivers for new hardware, but the fact that some very expensive software doesn't work on Windows 10 makes it all the worse.